During the past year, your right to hunt, fish and trap is under relentless attack by animal rights groups lead by Senator Raymond Lesniak and Assemblyman Timothy Eustace.  These two politicians are using their position of power and network of politicians to take away your outdoor pursuits.  They are even circumventing appropriate legislative committees and procedures to sneak these bills through the legislative process so that your voice cannot be heard!  You need to react now and we will show you how! But, first, some background

The NJOA has been working hard and effectively at defending your rights.  We have passed numerous bills, and helped to write even more policies, but the huge amounts of money being spent by animal rights groups is eroding the interests of sportsmen.  A coalition of animal rights legislators in both the Senate and Assembly have thrown the scientific management of wildlife by educated professionals out the window in an attempt to replace science with emotion.

This is not the first time that we have faced a serious challenge to the right to hunt, fish and trap.  In 2007, two legislators, Senator Karcher and Assemblyman Panter attempted to change how wildlife was managed in New Jersey.  In response, the NJOA was formed and the sportsmen defeated these two legislators in the 2008 election.

Each day that we fail to act to react as a cohesive group the opposition gains strength and gets bolder.  Legislators who once supported us are now moving to the animal rights camp at an alarming rate.

Sportsmen must act NOW to reverse this alarming trend, or they may never have the opportunity to do so again. The organization that is in the forefront of protecting sportsmen’s rights in New Jersey is the New Jersey Outdoor Alliance

Here’s what you can do, click JOIN and sign up for the NJOA. Take action when Alerts are sent on pressing legislation. When you join your membership helps us to help you.  Get involved!  We need you to let your legislators know how you feel about their lack of respect for sportsmen’s rights.  Below is a link to a prewritten letter ready for you, and it’s, already cued to go to YOUR legislator.  Your letter will put them on notice and remind them that 2017 is an election year.

Now is the time to act, before it’s too late.  Hunters, freshwater anglers, saltwater anglers and trappers must come together as we did in 2008.  We will come together again, forming the largest single voting bloc in New Jersey.  Act now with the New Jersey Outdoor Alliance and save your rights and the rights of your loved ones, or regret your inaction for the rest of your life.

To send a letter to your local legislators as well as Trenton supporting the NJOA and rejecting bad legislation currently proposed click HERE and fill out the form. Every single message counts. 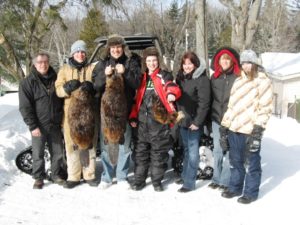