On Thursday October 13, 2016 the Assembly Environment and Solid Waste Committee, chaired by Assemblyman Tim Eustace, released two pieces of legislation that would change the way black bears are managed in New Jersey. Assembly bill A-3527 would make the black bear a non-game species which could no longer be hunted and AR-127 which opposes the expansion of bear hunting seasons in New Jersey. These two pieces of legislation pose a serious threat to the management of all wildlife in New Jersey.

New Jersey has a healthy and expanding population of black bears centered in the northwest corner of the state. Population estimates place the current numbers between 2,600 and 3,000 bears. New Jersey has one of the highest densities of black bears per square mile in the United States. Without a sustained harvest of bears there is no other current way to control this population. While education should always be an important component in any bear plan, education alone does nothing to reduce bear/human interactions. The expansion of the 2016 bear season was instituted to allow the harvest of bears before they started to enter dens for the winter thus exposing a greater portion of the population to possible harvest.

If we look at the list of sponsors and co-sponsors of these two pieces of legislation the first thing that one notices is that there is no bear hunting in any of their districts because they are not part of the current bear management zones established by the Division of Fish and Wildlife. What it appears is that a group of animal rights legislators who have no idea about sound management of wildlife is are attempting to impose legislation on the rest of the state, that if passed, will place our citizens in harms way of an ever expanding population of black bears.

This attempt at the passage of this legislation is the first step to limit hunting in New Jersey and should be a wakeup call to all of our hunters, trappers and fishermen that if they don’t get involved they stand to lose their rights to hunt, fish and trap in New Jersey. Animal rights organizations are spending a lot of time and money to encourage legislators to introduce legislation that would end hunting and trapping in New Jersey. The only goal of these legislators is to be re-elected, not the passage of sound legislation that would protect both the wildlife and the citizens of our state.

This must be a call to arms for every sportsman and woman in our state to get involved before it’s too late. Call or write your Assembly person and let them know that you oppose A-3527 and AR-127. Let them know that you vote and will be following their positions on these two pieces of legislation and that you have a long memory that will extend to the elections in 2017. Also it is important that you support the New Jersey Outdoor Alliance and The New Jersey State Federation of Sportsmen’s Clubs. These two all-volunteer organizations are the voice and soul of the sportsmen in New Jersey. 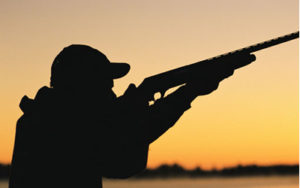